If you paid close attention to the timeline, we would finish a trial production in November. However, that’s not the case because we had to a few items still pending:

We had spent a significant amount of resources and time on the switch mechanical design with little avail. Until recently, we were able to make a final decision on a major change (more on this later). This time spent impacted our decision making and development in other areas, causing an overall delay from our original schedule.

In this update, I’ll go over each one of these topics, share the progress and changes we’ve made.

In the previous update, I covered how we changed the keyboard bottom case color to match our midnight blue (Pantone 289C). Now it’s the top plate’s turn to go through the same process.

The plate manufacturer recently started to fine-tune the top plate color and sent us 2 samples.

You can see that there’s a very slight difference between the two, and just like our other color samples, one of us needs to sign the golden sample. I’m excited how the colors turned out as it’s really hitting that midnight blue (289C). It’ll contrast nicely with the keycaps and make the entire keyboard more mature and sleek, versus it looking almost like lego.

After deciding on the color sample, they’ll make an entire plate sample with the final color. This will round up within the next few weeks. 👍

At the time of writing I just picked up 8 PCBA samples of our latest revision and Jeroen received 2. Jeroen is testing and confirming if everything works. If that’s the case, then we can finally check off the PCBA as done.

It took us significantly longer to finalize the PCBA because we had decided to explore a different design route. This different route would lower the overall PCBA cost by using fewer components. However, after many iterations, we were able to conclude that it would come at the cost of reading speed.

That’s a compromise we were not willing to make. We want the best possible reading speed and get the most out of the technology. So, we reverted to our original design with a few improvements. That’s the design Jeroen is now testing.

Though Jeroen spent a significant amount of time on the other design, it didn’t go to waste. He learned during the process and explored unexplored territory. That’s valuable. Once everything checks out, Jeroen’s able to work in-depth on the firmware. 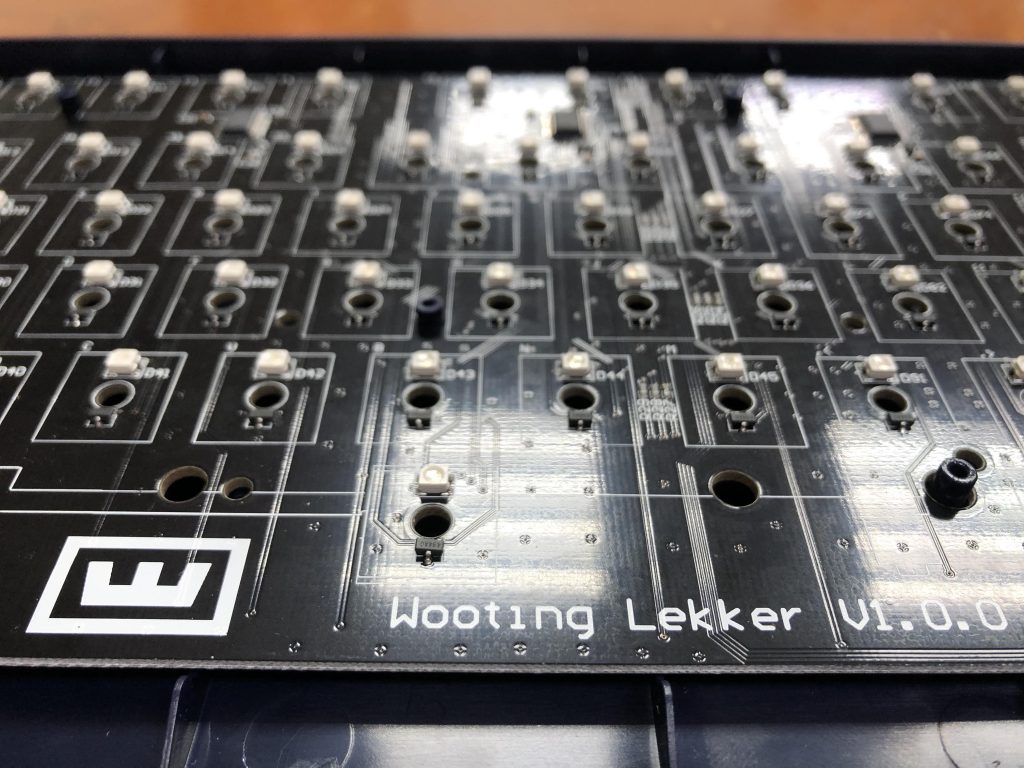 If you look closely, you can see these large white boxes. Those are our new RGB LEDs. They should be brighter than our previous LEDs.

Now that we have the final PCBA, you can expect us to share more Lekker switch demonstrations in its final form (technology-wise).

This is the crux of it all. When I drafted our original plan and schedule, I didn’t expect that we’d make any changes to the switch. The switch factory had nearly everything ready and initially, we planned only on a few improvements. But we weren’t satisfied with the switch mechanical design.

The switch factory had opted for, what I’ll call, a 4-hook click system. The 4-hook system is part of the bottom case of the switch. When you click in the switch all the hooks will nestle underneath the plate. This makes sure that the switch stays put but when you try to pull it, the hooks will not flex at all. Making it near impossible to simply pull it out of the plate.

This design was great when it came to ensuring that there was no wobble and a tight fit. Just not exactly what we had imagined. It wasn’t possible to hot-swap the switches and it required some force to get it on the plate.

I pointed out this was an issue and the factory agreed to change the bottom case. Thankfully, by this time we had Kevin on board and he’s very capable with 3D drawings. We started to focus on the overall mechanical design and got more familiar with the switch mechanics.

After multiple iterations, we finally had a switch design, a mold quotation and I thought, done deal. I was wrong, terribly wrong. During the design process, the factory engineer didn’t consider the automatic assembly machine. This is where it gets interesting.

We learned that in the process of making a switch, the switch molds themselves are not that expensive. It’s the automatic assembly machine and quality control machine where the real cost is hidden. These machines have specific rails, jigs and pieces tuned for each specific switch design.

If you change the design, even a little, the machine will either not run or jam very often. On top of this, they can’t simply swap around the parts at a moment’s notice and run a small production. Instead, they need a whole day to change the parts and calibrate the machine. You can see the machine in the switch factory vlog.

We were about to accept the original 4-hook design and come back to the hot-swappable design in the future. But not until we visited the factory to learn more about the switch assemble machine and the possible complications. There we realized that it would be a lot of work but we also learned that with a few changes to the design we’d be able to do it.

We’re making a new sample mold for the bottom case. This is a small mold with 1 cavity (1 piece of the part) to test the design. Once we’ve confirmed the sample, we can open the final mold with 16 cavities (16 pieces of bottom case per injection).

In the meantime, the sample mold bottom case is used to adjust and tune the auto assemble machine. By the time the final mold is done, everything else for switch assembly will be ready for production.

All of this has no impact on the technology and our software development. We were and can continue the development using the original switch design. However, we can now confidently say we won’t be able to meet our original timeline anymore.

If you read everything above, then this doesn’t come as a surprise. The project will end up waiting for the new switch bottom case, while everything else will be done. We’re already a small step from purchasing all the materials for production.

We originally aimed to get everything done before this date, but now it looks like we’ll just have to swallow this period of dead time. Thankfully, it won’t entirely go to waste. We can use the additional time on further software development and it also gives us some time to perform more in-depth tests with the Lekker switch (playing games).

The aim now is to get everything not related to the switch bottom case done before CNY. Then we can cross off all dependencies and not waste any time after CNY. I’m just going to take it safe and move the delivery month to May 2020. I don’t want to overreach and keep a buffer in the expected delivery date.

We will release a new timeline overview to reflect the above. We will take another look at the timeline in January and double-confirm its validity in March.

This is what it’s all about

Fear not, this is part of the experience of developing a product and why you’ve backed us. Your support is what allows us to make these decisions and tackle the challenges ahead. Without it, we’d end up with a sucky, soulless product. We still have a road ahead of us and there’s enough to share along the way. You’re part of it.

When I receive the new bottom case samples, I’ll write a detailed update on the changes we’ve made to the switch and how deliciously simple the whole thing is.

In the meanwhile, you can expect multiple updates to come out at a faster pace. For example, I haven’t even talked about the final Lekker keycaps samples (next update). I can’t wait to share it!