Closing a chapter to open another… it’s March

I write these blogs every month, or at least, try to keep it up on a monthly base. Whenever I don’t publish one, I’m really sunk into something and have to forego it for a month. This month was a good month and I feel Wooting’s development is going non-stop.

As you might remember we partnered with Seasonic for distribution in the United States and Europe. As this partnership progresses, we will become available in more countries and languages. But it’s still a process. While this was quite the thing to kick-off, it also had a major impact on our supply chain.

In the past, we were dependent on the cash we had available and the possible success of the sales. This limited us in making larger investments or pushing suppliers to comply to our specific needs. Now we don’t necessarily have a lot more cash at hand, but we do have a guaranteed quantity production we can meet. This drastically changes how we calculate the cost, plan future product and how we can push suppliers to meet our demands.

Over the last couple of months, I had worked on figuring out what this meant for us in 2019 and onward. How do we change our administration, project management, company structure and grow to scale? I was able to answer a lot of these questions and create a clearer picture of Wooting going forward. Is it the holy answer to everything? No, but at least it gives everything direction and purpose.

There’s just one pending question that’s still floating around my head. Are we still allowed to use Kickstarter?

The last time we Kickstarted the Wooting two, we already received a few comments about us “earning enough” from the Wooting one and not needing to do it again for the Wooting two. Though it’s far from reality, people’s perspective on things has an impact.

Now that the Wooting company is 3 years old on paper, we are able to receive credit from banks, which can enormously help to fund these projects at a cost. Furthermore, the distribution partnership should also help us guarantee a number of sales.

But, does that mean Kickstarter is already off-limits for us? It’s still a great launch-marketing-sales platform that can significantly decrease risk and guarantee return on investment. We have built a track record on Kickstarter and are also able to guarantee delivering a quality end-product. No fuss, no bull but maybe few delays :o)

You often see companies absolutely abuse Kickstarter as a pre-order/groupbuy platform and disregard the excitement of story, passion, and love for the project. They’re just there for the money grab, secure the sale, reach those big quantities, have an excuse to sell it far below retail.

Some people might point it out, but the majority just accepts it and leverages the benefit over the purpose. I wonder how this impacts the concept of Kickstarter since it definitely kills the story aspect for me.

Where do you draw that fine line between an actual project of passions versus it being a simple transaction? Or is it really about the ability to fund this project on your own bearing the total risk versus having nothing delivering something.

I personally certainly hope we can be back on Kickstarter again. Create a new project, new story, new challenges and ignite the community. It’s fun, it’s hella fun.

What do you think?

Alright, let’s dive into the “what’s going on” part. This is your TL;DR:

The Wooting two Kickstarter was the second Kickstarter we have ever done. It had a different twist to it than the Wooting one and we had almost decided not to do it. But wow, I’m so happy we did. The Kickstarter launched the much requested full-size keyboard way ahead of schedule (of what we were able to afford) and it ignited a fresh breeze of inspiration to the Wootility.

Everybody that helped make the Wooting two a reality deserves a pat on the back. Your patients, willingness and excitement for the Wooting two really pushed us forward into the right direction. Especially the ones out there that backed us a second time or already owned a Wooting one. Woaooowwwwwwwww.

Also on the business side, the Wooting two is attracting a much larger audience and is also helping us in the sales department. This just proves again how important you guys are as stakeholders, not only letting us know where the demand is but also helping us fund the project for it.

The community had also grown with a great number, igniting conversations, finding issues and testing our customer support. Big thanks to our Wooting volunteers and community members helping out. A special shout-out to:

Furthermore, it brought up the question of what we should do with the RGB and Analog SDK. You can read and join the discussion on Jeroen’s thought piece:

A lot of you also shared your setup/receival picture with us on Discord .#I_have_my_wooting_hype with a shout-out to the few that crafted the keyboard stand for a picture.

It was amazing to see the number of pictures that were shared and it’s still a surreal experience for the three of us.

Your Wooting keyboard isn’t just a piece of hardware now, it’s a story you can share with others. Not just a purchase, but an experience. And I hope that we can keep adding to that story and experience for the coming time with new projects and software developments.

An overview of the pictures on Imgur

Wooting two arrival pics (and some Wooting one hype)

We had sold out the entire Kickstarter production earlier than expected. Which is great, but also sucks for the newcomers. We initially planned to produce a larger quantity but were a bit hesitant to go all-in on a first production and put all our eggs (cash) in one basket. In hindsight, it would have just been fine.

That said, we started Wooting two pre-orders again at the discounted €/$150 on the:

Production is happening this 8th of April and we set delivery on mid-June. This should give enough breathing room and likely delivery earlier than mid-June.

You might have noticed that we’re actively working on the Wootility. This came with its hiccups but also gave us insight on how to improve.

We started with updating the Public Trello board, it now better reflects what we’re working on. It’s not perfect yet and it’s not 100% matching with our work process yet, but it’s the next best thing we can do to give insight.

Very important is that there’s a bug/feature request card with a form link to submission. You can also decide to add a comment to the card to contribute. After submission, they are reviewed and if deemed relevant it’s added to the public board.

We are still thinking of how we can better document and open discussions on these topics without losing oversight. But we want to avoid forums, other than Reddit, as much as possible. Suggestions are welcome.

Jeroen posted a though piece on Discord concerning the state of Wootility testing.

The first DKS beta had brought a lot of tiny confusions and bugs which lead to a general sense of instability. While we can just write this off as “ it’s beta”, that is not what people expect (nor should) from us. The beta showcased that we had reached a point where stability has become an important focus point.

This means we are going to create more insight into the Wootility errors with automatic error reporting and “soft” analysis of people’s experience. It’s still a new development, but when we start rolling it out, you can expect everything to be optional with an opt-in and explained in detail what the purpose behind it is.

Furthermore, we are going to change the Wootility testing phase with:

Open-beta: Features have been tested and will be usable by the public without breaking changes.

Stable: This is your first time experience with the Wootility and what you download from the website. It will be behind in features but ensures a great first-time experience setting up your Wooting keyboard.

DKS was an important feature for the Wooting keyboard and we had temporarily removed it from our V3 release. We were still working on its advanced version and underestimated the amount of time we still needed to complete it.

The topic written above also influenced the timing of its release, since we had to focus on making sure that a lot of new bugs in V3 were ironed out.

In the last month, you were already able to test the advanced DKS in the Beta version of the Wootility. Now we’re at a point that we can almost release it to the public.

The public release of DKS will come together with new Wootility introduction videos and introductory splash screen.

We hope this will drastically improve the first time experience with the Wootility and unleash the potential of the keyboard. Advanced DKS is truly a feature beast, and it will give profile sharing a lot more usefulness.

My program tells me this is about an 8min read. Sounds like more than enough to me 🙂 If you have any feedback or comments, you’re welcome to share it in the comments here or on Reddit.

ps. Remember that we still owe you a favor. 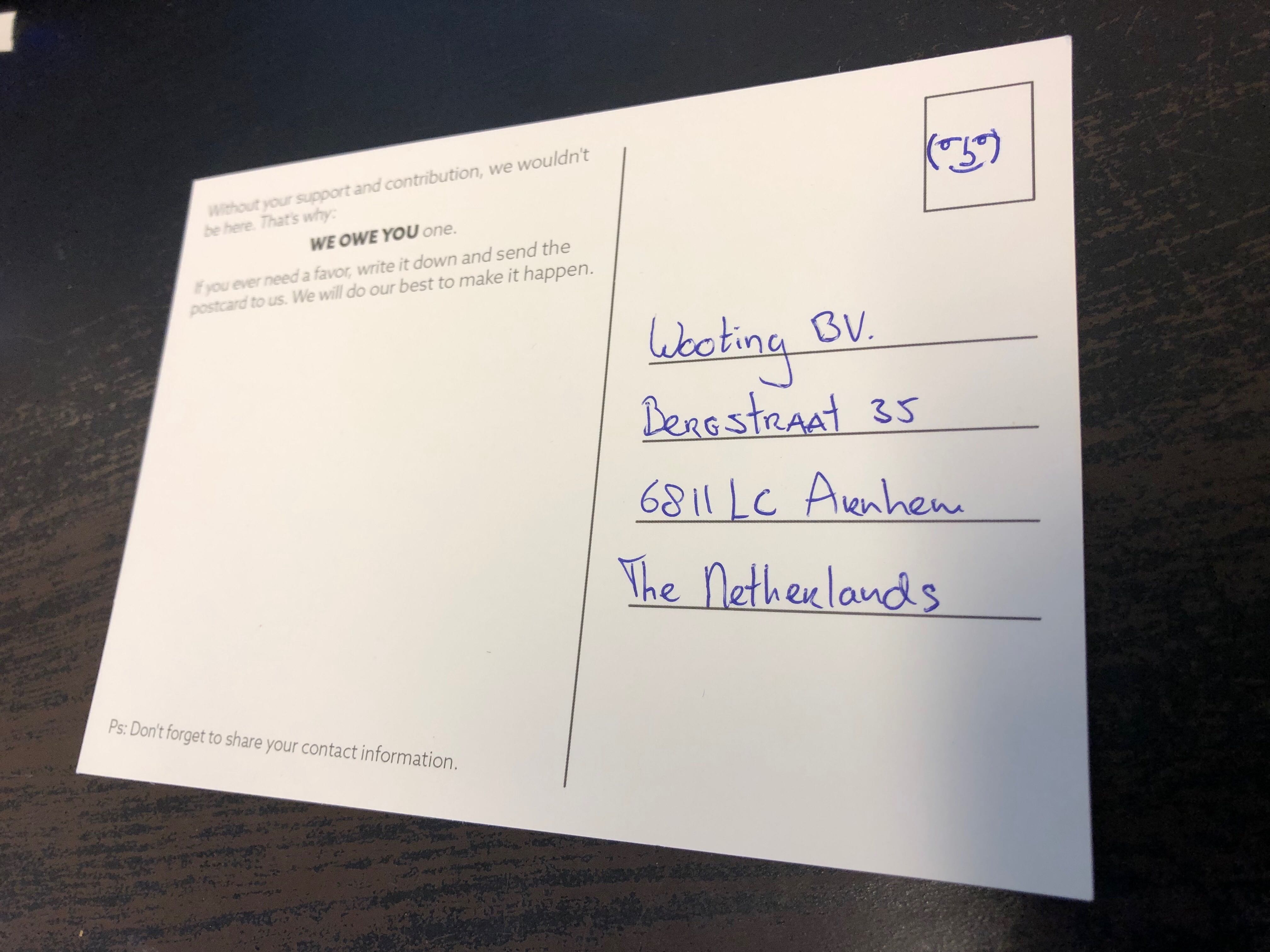