Everything you need to know about 60% and 65% keyboards

In the wonderful world of mechanical keyboards, there is a form factor for everyone. From the bog-standard full-size to the gamer-oriented tenkeyless keyboards, you’ll be hard-pressed not to find a suitable form factor for you. For a long time, the 60% keyboard was just that for me. However, I see a lot of beginners mistaking the 60% for a tenkeyless and even some that have never seen a 60% keyboard at all. Add its close sibling, the 65%, to the mix and the soup is ready.

In this post, I will hope to clear up some of the mystery and answer a couple key questions such as:

Without further ado, let’s get into the nitty gritty, starting with the basic 60%.

In respect to its name, the 60% keyboard covers right about 60 percent of the full-size keyboard. In practice, this means that you’ll have direct access to all buttons in what is called the alphanumeric cluster. The image below will illustrate what I mean if the terminology is unclear to you:

Those of you who have never seen this before might be wondering what the point of going so minimalist might be. You might notice that the pure 60% form factor has no arrow keys, no F-row and no navigation cluster, and you would be right. All of these functions are accessible, but not with dedicated keys. You are giving up quite a lot to reach this state of minimalism. Let’s go over some of the 60% keyboard advantages and conversely, disadvantages. 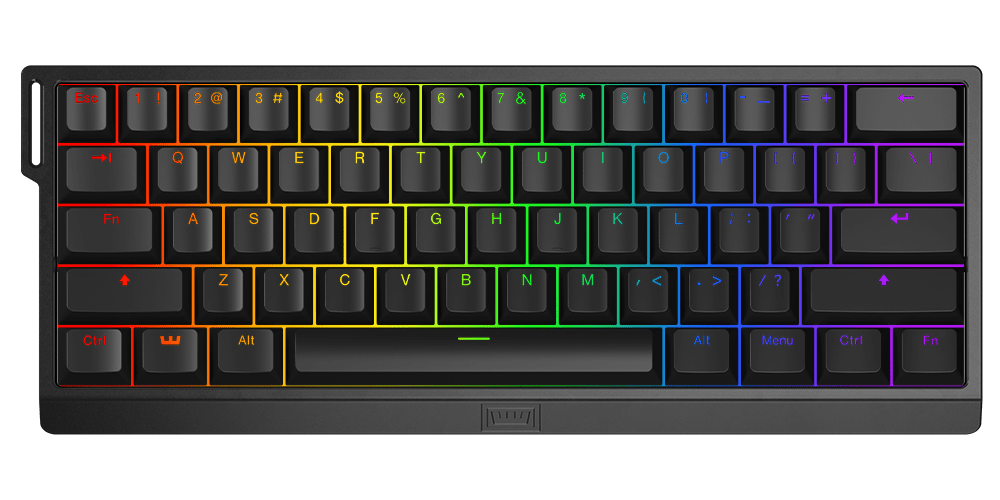 Wooting 60HE is the most advanced (gaming) 60% keyboard that can give a competitive advantage with unique analog features, such as rapid trigger and adjustable actuation point.

If I had to pick a main attraction of of 60% keyboards, it would simply be their size. The first thing you’ll notice with a keyboard this small is simply how much mouse space you have.

By taking away the numpad and the navigation cluster, you gain about 15 centimeters (that’s about 6 inches in freedom units) of horizontal space for your mouse, while keeping the keyboard in the same spot. This allow you to keep your hands closer together, which is both more ergonomic, and more comfortable. Ever seen esports professionals angle their keyboard like this?

That’s because they’ve grown accustomed to narrow desks in LAN setups and they needed to figure out a way to get more room for the mouse. Considerably angling your keyboard recovers some space for the mousepad. With a 60%, this problem is practically deleted from existence.

The small size also lends itself to taking it on the go with you. If you do a lot of typing on your laptop, you might want to consider a 60% keyboard to go along – it barely takes space in your bag and will surely feel nicer to type on than the chiclet keyboard of your laptop.

The 60% keyboard also lends itself well to customization. They usually come with standard layouts and thus they enjoy the luxury of being compatible with basically every single custom keyset ever made. There are also a number of 60%-only keysets being made, which naturally sets you back less money since they only come with enough keys for a 60% keyboard.

Custom cases are also abundant for 60% keyboards, as they all use the standard screw placements and for this reason, you have a lot of options to turn your keyboard into something unique.

The other nice thing about them is that there are a lot of options available, and some are a whole lot cheaper than usual full-sized keyboards. Popular budget options for example are the Anne Pro 2 and the (now old) Poker 2.

Since the 60% form factor has to compromise so much to get the minimalist physical appearance, the keyboard manufacturers have come up with a simple solution: a programmable layer. This usually takes the form of a PN-key and by holding it, the functions for each key change. Virtually all 60% keyboards have this functionality and the best part is that you can program the layer however you want with a few simple keypresses. They can usually be adapted to recording simple macros as well, right there on the keyboard without any need to install complicated software.

The programmable layer is both a solution to a problem, as well as a unique advantage in that you can modify and tune the layout to your liking.
Disadvantages

Now, for the other side of the coin. The keyboard giveth, and the keyboard taketh away.

I feel like while the size makes for the main attraction, it also makes for the form factor’s biggest and only downfall. The size means that you lose dedicated keys for the F-keys, the navigation cluster (the arrow keys and the bunch of navigational buttons above them) and the number pad. You still have access to all of these functions, it’s just not as convenient as it is with a full-size keyboard.

The F-keys, for example, are usually accessed by holding an FN-key (you’ll be familiar with this if you’ve ever used a laptop) and pressing the numbers 1-9 and the symbols that make up the rest of the row. Similarly, the arrow keys are often accessed by holding the FN-key and mimicking the arrow keys elsewhere on the keyboard. All of this requires some finger-acrobatics and puts your pinky to the test since it needs to hold either the PN, or the FN-keys to access different functionalities.

Should you get one?

Most people are put off from the 60% simply because it has no dedicated arrow keys. If that’s the case for you, you could just get a tenkeyless keyboard, which has the F-row as well as the navigation cluster, sacrificing only the number pad.

But another challenger just might have an answer for you, and that is the 65% keyboard.

As long as the keyboard is a 60% keyboard with arrow keys, the official designation for it is the 65%.

Since the 65% is very close to a 60% in physical size, the same advantages apply. You’ll get the same ergonomics and added mouse space. Furthermore, the 65% might make for an even better laptop-companion, since it comes with a rudimentary nav cluster, something I find invaluable when working on a laptop.

The single advantage over the 60% are the dedicated arrow keys. If you feel like you can’t get used to the FN- and PN-layer jiggling to access your arrow keys all the time, the 65% keyboard is right for you. The close proximity of the arrow keys to the alphanumeric cluster might put you off for a while, but it’s easy enough to get used to.

The 65% keyboard trades off some things in order to fit in the arrow keys, and this is its only disadvantage when compared to the 60% form factor.

The first downside is that there aren’t very many options if you’re looking for customization. Fitting in the arrow keys often means that the right side modifiers are squished, and that the nav cluster keys are on the incorrect rows, resulting in custom keysets to either not fit, or look funny when they do. Some 65% keyboards avoid this by leaving weird gaps around some of the more ill-fitting keys, like the Varmilo VA68 below.

Going for a 65% also means that you’ll be hard-pressed to find custom cases that fit. Some keyboards, like the Tada68 have optional aluminum cases that you can order it with, but most times you’re stuck to the plastic default case the keyboard ships with.

Should I get one?

If the only thing keeping you from 60% keyboards is the lack of arrow keys, you should go for the 65%. Just keep in mind that further customization might prove a little bit difficult, if you’re into that sort of thing.

In my opinion, 60-65% keyboards represent peak performance for gamers, especially if you primarily play MOBA or FPS games, which usually don’t have too many keybinds for you to worry about. I find that very few games nowadays utilize the F-row, and for that reason I am happy to toss it to gain access to the space savings these keyboards offer.

If you absolutely can’t live without arrow keys, the 65% is an ideal choice for you. If even that is not enough, you might want to move to even bigger keyboard layouts.