When we started Wooting, we decided to use the Flaretech switch for our keyboards. That time, it was one of a kind with analog input potential. After extensive R&D with the Flaretech manufacturer (Adomax), we hit a limitation. The analog range was only possible from 1.5mm to 3.6mm of the total 4mm switch travel.

Nonetheless, it was a breakthrough, since we were able to get an analog input signal on each key without breaking the bank.

Ever since, we learned a lot from manufacturing analog input keyboards and your feedback. We made all the Quality Control (QC) software ourselves, created a custom machine to test each key. And received an immense amount of feedback from you using it as a daily driver. Creating new insights in where the pitfalls are and what can be improved.

The Flaretech switch has since made improvements in feel, durability, and quality. Helping with the efficiency in production. Unfortunately, it wasn’t able to make the same type of progress for the analog input range. A great optical switch in itself, but still a limitation to analog input development.

That’s why in 2018 we had started to explore other input technologies while developing the Wooting two. After all, we want to keep making progress. We learned from Sunjun_Kim after his publication of Impact Activation Improves Rapid Button Pressing that hall-effect sensors were very effective and inexpensive to use for analog input. However, there was nobody on the market making any type of hall-effect or magnet switch at the time, except for one company.

Ace Pad Technology (APT) made a custom hall-effect switch and became publicly known when they brought out a keyboard in collaboration with XMIT on Massdrop. An awesome and curious development that was well supported for good reason. I had decided to reach out to APT and explore the possibility to make an analog version of their keyboard.

After some good initial conversations, we started working on prototype keys. Their contact person was nice, their engineer excited, their feedback fast and it looked like this was going to be gold. When we received the first sample with different hall-effect sensor models and keys. We were really excited. 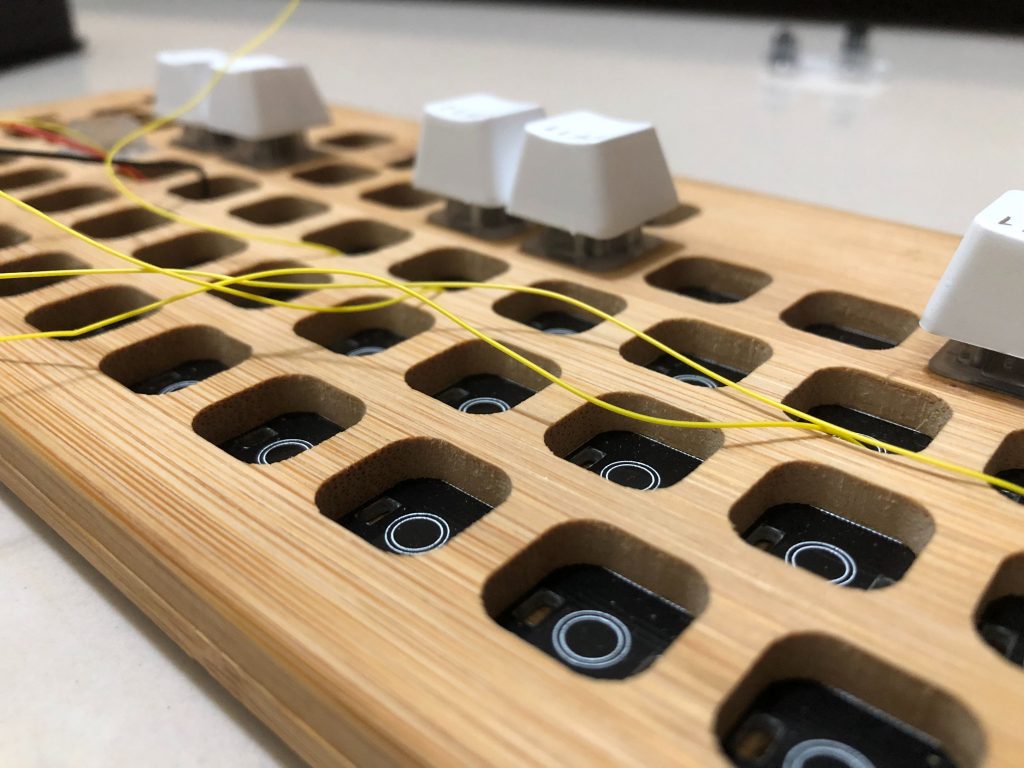 The result, it worked better than I had expected. The technology still had few issues, but nothing we couldn’t handle or improve over time. There was yet one major issue. I had heard from the XMIT x APT keyboard quality issues but I didn’t want this to be an obstacle in the exploration phase. But when I tried the switches and learned more about their manufacturing process, I was afraid we’d be a long road from Wooting’s quality standards. And we’d be struggling more with the keyboard and switch itself than the actual technology.

I had to, unfortunately, tell them that this alone would become an issue and make it impossible to start a project. Now don’t get me wrong, APT’s keyboards for the price are perfectly fine for what it is and I know they are more than happy to fix and help out with any issues. I hope they’ll grow and improve over the next years, so we can eventually start a project.

After this event, Computex 2018 came close and, somehow, I had opened new doors into the Hall-effect sensor business. I learned that Huano was working together with mPower to make a prototype hall-effect switch (more on these two later). It was at a very early stage and focused on digital input. These kinds of things tend to happen to me.

I had set up a meeting with both and started talking about the possibility to make an analog version. This is where it started to get real.

At that time, we had just launched the Wooting two and I knew we would spend 90% of our time on it over the remaining year. So we decided to give it a far lower priority, focus on the Wooting two and software first. That said, we really wanted to start the hall-effect switch development and decided to do something low-key. See what they have, what it can do, find out exactly what we’ll be working with. 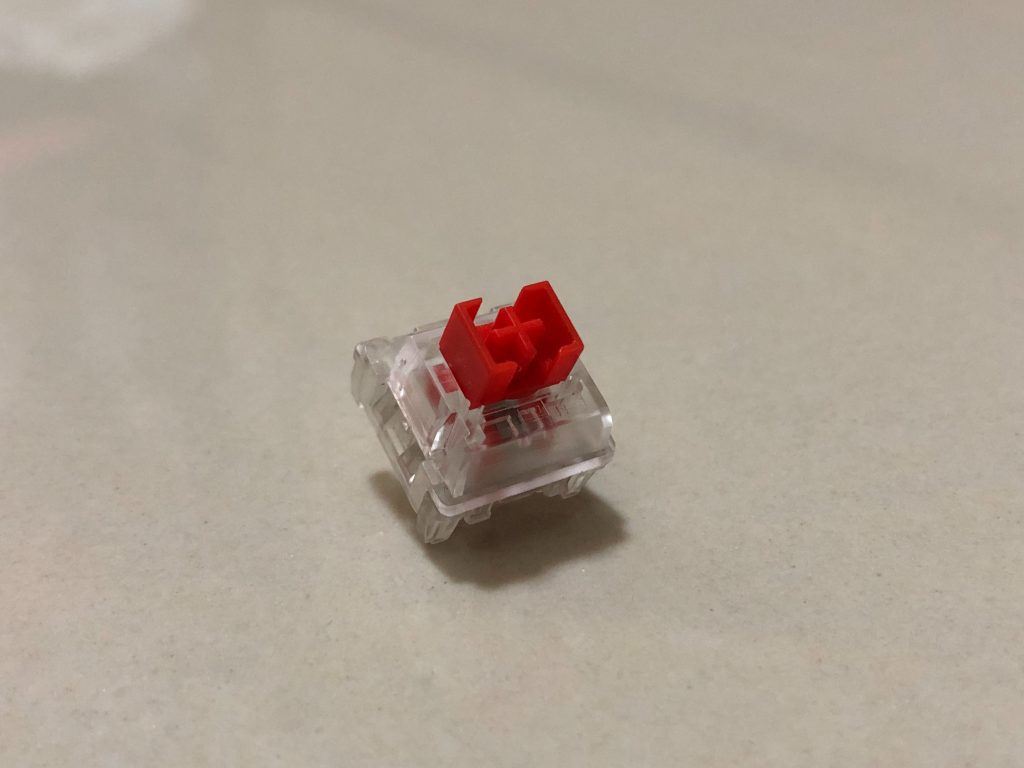 Over the course of 2018 and during the Wooting two production, I learned about more switch makers developing hall-effect switches. This was good news, we could focus on what we are good at and just work with what’s best when it’s available. Why compete as a non-switch maker. But the progress was slow with many of them and I started to increasingly feel uncomfortable with the direction the development was taking.

I wanted to take things in our own hands and not depend on another party to tell us what is or isn’t possible. Let alone to be in the dark and wait for whatever to happen. I’m an entrepreneur, I want to venture stuff.

For Wooting, we always need to work on what’s best for analog input as a whole. We have an incredible amount of experience in making analog input keyboards. We already know what hardware and production problems will emerge, how to solve them, and that at the end of the day… Software development is the greatest cost of all, which requires long-term investment.

I have to admit, I am at times a control freak and can be extremely critical and harsh with things. I often grind my gears on the Wooting live-streams, because I just get so frustrated with the state of some things. Like mouse scroll wheels, jeez! 😉

This is when Wooting’s hall-effect switch idea came back to life and we placed more priority behind it. We now had full freedom in the development, brand, switch and product strategy.

Since everything was preliminary, we decided not to openly talk about our research and ideas until we were ready. if we did, it would create false expectation and confusion. So I’m really happy to finally get this off my chest and start to openly share everything.

This is the Lekker switch

We’re doing Lekker our thing with a Lekker switch. The Lekker switch is a hall-effect switch with full analog range. 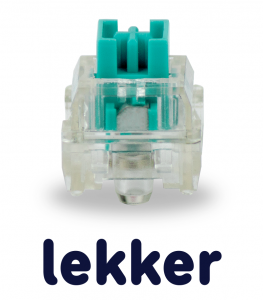 We decided that it was better to separate the switch name from the Wooting brand, so that we can shape the meaning, feeling and strategy behind Lekker to become its own thing.

Lekker is a Dutch word meaning Delicious, Tasty, Luscious, or even sexy. It’s also often used sarcastically and a very common word in The Netherlands. I’d say since we decided on the name, the frequency and awkward moments using the word has become countless. And it’s pretty hilarious. If you’re not from The Netherlands, or even South Africa, then this word might not carry a lot of meaning.

Time to learn it. It’s Lekker.

In the short term, It’s our key to unlocking full-range analog input. We want to put enough love and attention on it so it can reach its full potential and make it entirely viable for mass production. This is a priority.

In the long term, we want to lower the entry barrier for analog input switches for keyboard makers and hobbyists. This means we’re looking to support other makers to make an analog input keyboard and provide the tools required.

It’s ambitious but not far fetched.

In fact, if you’re a keyboard maker or hobbyist, you can already reach out to social@wooting.io and let us know your idea or desire. We welcome anybody and will reach out when it’s ready with more information.

To fund and launch the Lekker switch, we also have a special project in mind that will unveil itself bit by bit in the upcoming weeks and it will be demoed together with the Lekker switch during Computex 2019.

To realize the switch, we obviously can’t do it ourselves, we are not switch makers. And, in my opinion, it’s good to be transparent about these things. This will just be a brief part, as I’ll get more into it as time passes. We have two key partners in making the Lekker switch and technology.

The switch maker is Huannuo, better know as Huano. You might know them from their Mice switches, they also do keyboard switches which had only rotated in their local market, China. In general, they are what you call a “switch” company. They make all kinds of buttons that go on or off. They’re really great working with and know their switches.

The hall-effect sensor is made by Major-Power, also known as mPower. You probably never heard of them before. They’re a Taiwanese company that makes IC products including hall-effect sensors. As you might know, I live in Taiwan, and I’m really happy to work with another local company here. We’re currently working on a new sensor optimized for analog input.

I can’t wait to bring you guys to visit their factory with the Wooting vlogs.

It’s still a new development and we will release more information over the coming weeks. We’re putting an emphasis on the quality and performance that we can achieve with the Lekker switch. We don’t want to rush its development and we want you to play a heavy role in the finalization of it.

No bs, no fancy marketing words or make-belief. Just you and us making cool stuff.

I hope you will join our venture and support our plans. Be sure to subscribe to our update list on Lekker switch. I’m extremely excited about this and can’t wait to share more as we go.

In the trend of creating and doing new things. Join the discussion thread on Twitter. Got questions, nice words or just want to share your excitement. You are welcome to do so with a reply or retweet.

Or join the conversation on our discord community.

PS: If you happen to be at Computex 2019 this year, we’ll have a demo at the Sea sonic booth: Nangang Exhibition Center 1F, Booth I0218.