Enormous thanks for supporting the Lekker switch project. I can’t describe the importance of the pre-orders for the Lekker switch development. If you would have not supported us, then we would consider redirecting all our efforts and forego innovation for the time being.

We love progression, we love it so much, that it hurts our sales and bottom line 😅. The launch helped us regain lost opportunities and continue to push innovation. It also creates an environment for us to tweak the final product versus pushing it quickly to market for a faster return on investment.

So, again, thanks a lot for supporting the Lekker switch project and your confidence in us. Let’s look at how things are going.

We didn’t sell out all thousand keyboards, aww. But that was also outside our expectations. This was the first pre-order launch on our online store instead of Kickstarter.

We wanted to shake off this sentiment of being a “Kickstarter” company, conceived as people exploiting the platform and using it as a pre-order/discount platform. Honestly, we’re a bit of idealists. All we want is to communicate a clear message that resonates: you and us together making impactful products, honestly and transparently.

We noticed from our previous Kickstarter that our initial boost was always generated by our fan base and that we attracted a lot of new users from outside the platform.

So, when we decided to launch it on our online store we expected to get the same boost but weren’t sure what’d happen afterward. This meant selling at least 200-300 on launch day. We tried our best to create a hype and scarcity, a first for us, to get a good boost on the first day. It got us a bit over 300 on launch. So we reached our goal 🥳.

The sales dropped very fast after only a few days. On a crowdfunding platform, the sales usually slow down over a week. Now, it was almost the day after. Oooffff.

We hadn’t created any steady stream of (new) traffic (users) to our Lekker Edition. So, how would people even know it exists? Let alone, those early adopters, the pioneers, the status-quo breakers.

This is a big difference from a crowdfunding platform that will organically create traffic for your project. So, we fired up an (unlisted) video advertisement (did it reach you?) on Instagram and youtube. And got to work on creating more awareness for the project with social posts and email blasts.

Now we’re at 411, that’s nearly 100 additional sales in October. Not too shabby 👍. In contrary to a Kickstarter, this project availability stops at 1000 pieces and not on a specific date. It gives us a bit more runway.

If you have some fresh ideas or suggestions on how we can best market or create more awareness for the Lekker Edition, please let us know. We’re always hungry for ideas and opinions.

Jeroen, Kevin and I went to China for over a week in October. The goal was to visit different partnering factories and assess some new factories. Including our Lekker switch and keyboard manufacturer. I had brought my camera with me to create vlogs (releasing next week) and we even did a livestream from China.

It was quite the trip, we went around Dongguan area visiting different factories before we headed to Zhaoqing, where our keyboard assembly factory is located. Unfortunately, Zhaoqing is a 3-hour drive from Dongguan and after visiting our assembly factory we had to head back to Dongguan 😿. Dongguan is a densely populated manufacturing area for electronics including keyboards. 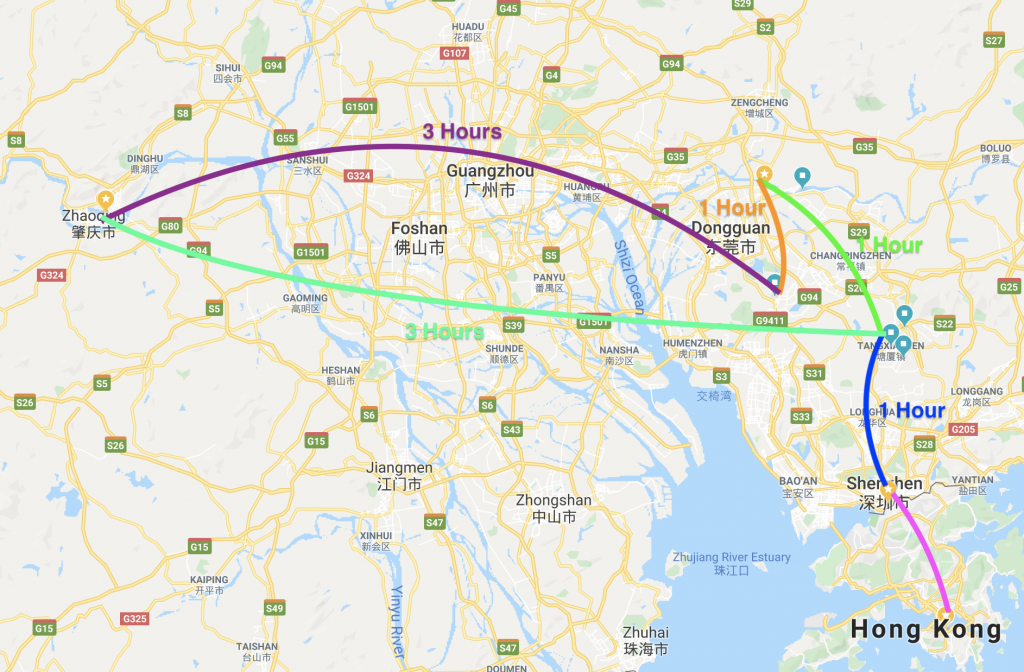 It’s really hard to imagine how incredible large China is. The area we traveled around is about 1/3 the size of the whole Netherlands. It’s only 8% of its (Guangdong) province size. The Netherlands fits about 4.5 times in Guangdong province and this province covers a bit less than 2% of China. Woah, I come from a small country.

One of the first visits was our keycap manufacturer. We had to confirm the keycap colors and appoint a “golden sample”.

Weeks before the trip, we were on a hunt for physical color samples for the Lekker Edition. We had already decided on the Pantone colors, but we quickly found out that the Pantone color alone was far from sufficient. There’s a whole science behind colors, quite amazing how difficult it can get.

This same concept is also true for the raw materials, printers, plastic injection, anodization or anything producing a color. This is why Pantone colors are a directive, not a 100% accurate recipe. The best way to deal with this is by creating or finding a physical color sample of the same material. Then the manufacturer can compare the different results with the physical sample.

I went to a Lego store together with Kevin to find Lego pieces that closely matches our desired Pantone. The quality and color accuracy of lego is simply amazing. We found some really dope colors, but none of them hit the mark.

Kevin in the meanwhile went on the hunt for the official Patone plastic chips. These are accurate plastic samples of the Pantone colors. They sell at 20$ per color chip, but you can rarely buy a single chip and it’s surprisingly difficult to find a local vendor with stock.

Thankfully, Kevin is resourceful and Taiwan is full of surprises. Kevin was able to get his hands on the Pantone plastic chips for our 3 Pantone colors: 333C, 289C and 7548C. The C stands for the plastic variant. 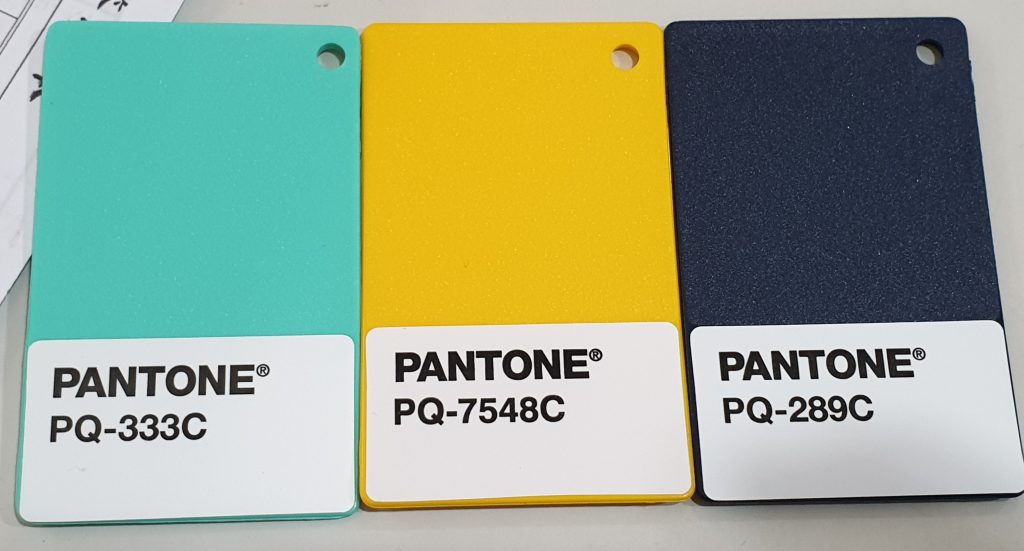 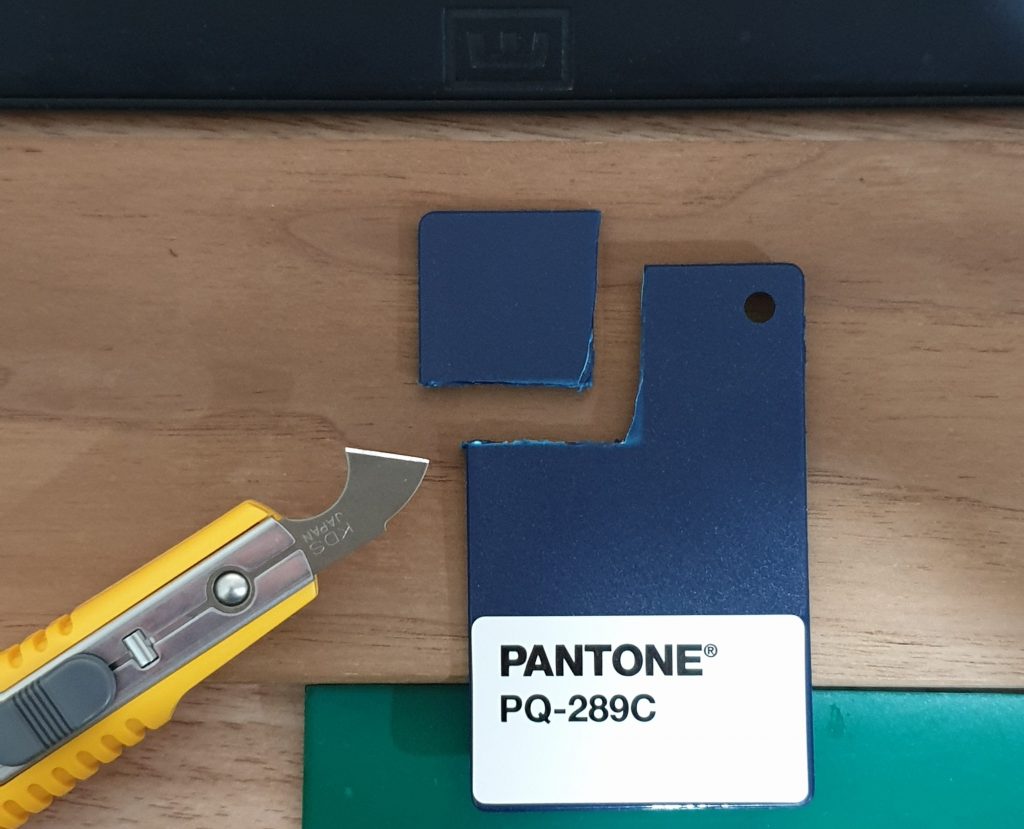 Sinds we were only able to get 1 sample of each color, Kevin proceeded to cut the color chips into 4 equal bits and sent it out to the manufacturers. The first complaint we got back was how small the sample was, haha. If they’d know how precious it is.

The keycap manufacturer had prepared 3 color samples based on our Pantone sample. Each result had a slight variance in color saturation. We marked the color sample with the closest result and called this the “Golden sample”. The golden sample is the reference sample for color, finish and material. 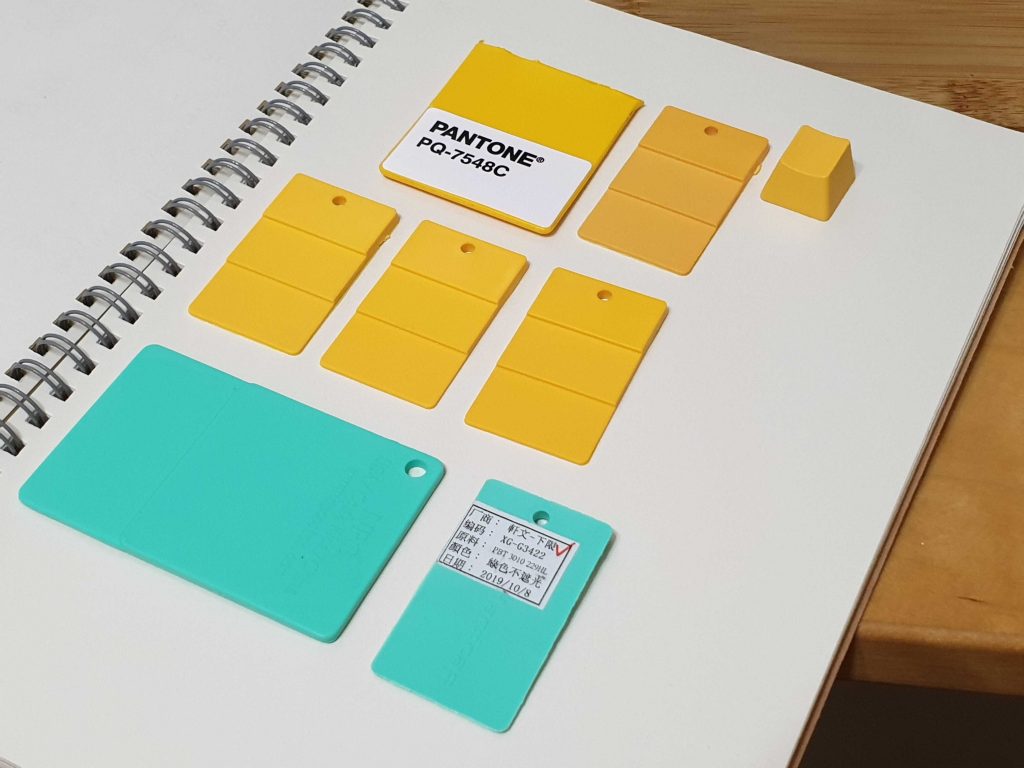 We went through the same process with the plastic injection factory for the bottom case. We already had a first sample, which you can also find back in our product pictures. This sample was far too blue. It was so blue that with the yellow flip-out feet it looked like an IKEA keyboard (sample A). This is why we changed from our original Pantone 296 to 289 and used physical samples to confirm the final color. At the factory they already finished a new sample (B) but it had still too much blue inside.

Our goal is to get the Navy blue effect, when you see it, you might mistaken it for black but when you compare it to black, it’s definitely blue. We also like to call it Midnight blue.

The manufacturer tuned the raw material and was finally able to get the exact color we were looking for (Sample C). I’m quite confident that you’re going to love the result, I’ve already gone all crazy and started to color everything midnight blue (hex: 0C2340, but you can also use 000333 for screens). 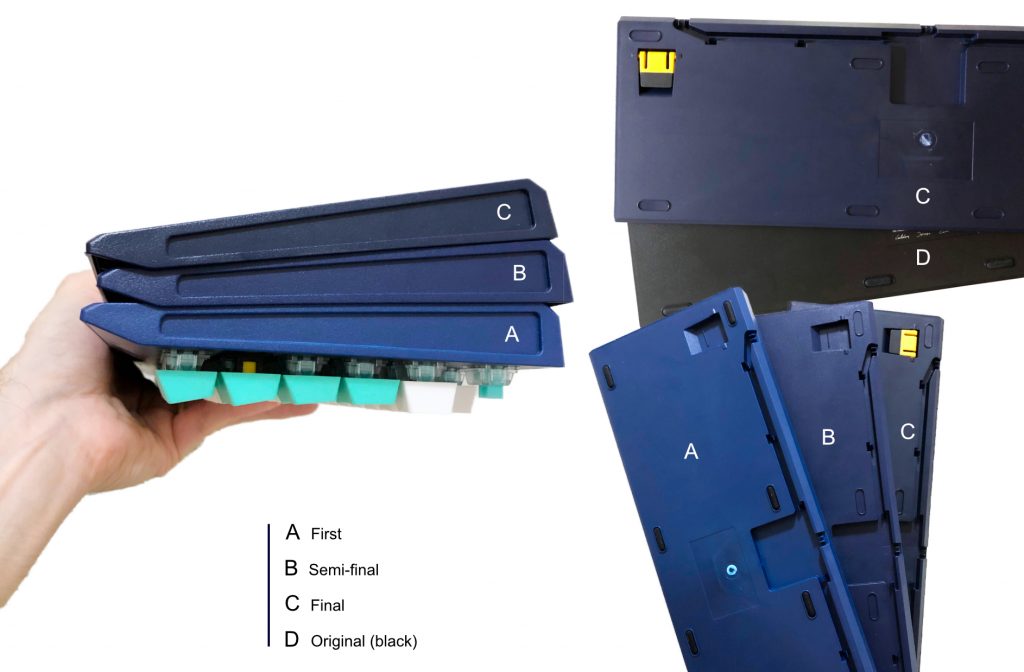 There are still 2 parts pending for final confirmation:

Particularly the first, top plate anodization, is tricky. Since we have a custom color (midnight blue), we had to purchase an oxidation tank to retain the color. However, we only have 3 months after approving the sample to do a production. If we wait for longer, the color will start to deteriorate and not match our golden sample anymore. This also means they’ll need to calibrate the color tank again, costing quite some time.

However, there’s been something lingering internally. The current switch design has a fixed “click” system. Meaning that you can’t easily pull out that switch from the keyboard with a tool. You’ll need to pop it out from the back. It has 4 large hooks that hook into the plate and tightly fit it into the plate. This means it’s not hot-swappable. 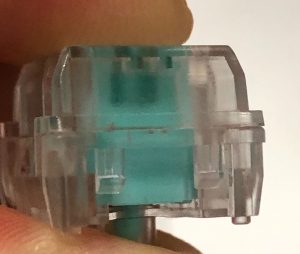 We initially weren’t opting for this design, but we sided with it since it would ensure a very stable fit in the plate combatting any type of “wiggle” issues. We also lacked switch making experience to come up with a better solution and we didn’t want to re-invent the wheel. Technology first, mechanics second.

But…. It didn’t feel entirely right and now with more experience and knowledge than before, we wanted to explore one more road before making the final call. Rember my first paragraph? Thanks to the support, we have more confidence to make risky decisions.

That’s why we opened a new bottom case sample to test a different click system. It’s a bit too early to share about it now, but I promise to follow this up once I have the samples.

That’s the progress for now. The factory vlogs are in the making and will release soon. Within the next month, we’ll start showing more in-depth the Lekker switch prototype; we’ll talk about the new Rapid Trigger feature. It’s a real game-changer!

We visited several factories🏭 to confirm color samples and checked on the Lekker switch. Read the first project update on the blog.