The last day of Dreamhack Winter

We had learned from the previous night that timing is key when it comes to sleeping in the main sleeping hall, so we would not be kicked out too early and it paid off. We slumbered through the entire morning on our thin sleeping pads and bag, without any interruption. As usual, our Dreamhack experience started again with a cup of coffee, music in the background and games screaming to be played.

Inspired by last night’s speedruns, we started the day with an oldie, the original Crash Team Racing (CTR) on the PS3, while watching some Pokémon Gameboy speedruns. Very satisfying, as it brings up old memories and hilarious laugh sessions, something you wouldn’t quickly find when playing various online competitive games.

The previous day, one of our Swedish gaming neighbors bought a new mechanical keyboard with red switches, the so-called “gamer” switches. Today, to our surprise, we saw that he switched back to his old mushy rubber-dome keyboard. After a short talk with him, he couldn’t get used to the lighter key presses and to his frustration it negatively influenced his gaming performance. I could argue that switching to lighter mechanical switches or any other gear gets taking use to, but in either case, he was not impressed nor motivated enough to give it a shot during Dreamhack. Later during our gaming session, we saw that he tried to sell the mechanical keyboard back to its original owner.

It made me think, was this proof that he was conservative and didn’t want to challenge himself to overcome the learning curve or did marketing just do a really great job to convince him to buy a mechanical keyboard with red “gaming” switches to improve his gaming performance. When I see the marketing campaigns from big gaming companies, it just makes me roll my eyes. Flashy meaningless words, deceiving statements, and non-realistic imagery describe the majority of their marketing strategies. Did it really convince him? Or does he also roll his eyes and are there other, stronger, influence factors?

On the other hand, we appreciated Gigabyte’s marketing by placing a famous Taiwanese gaming streamer in the midst of the regular LAN gamers, playing the exclusive Overwatch beta and showcasing Gigabyte’s computer build. It had some quirks, like the streamer’s stream was entirely in Chinese and didn’t connect with the local target group, but the basic idea was good. On a side note, I was a bit overexcited to find Taiwanese people in the midst of Dreamhack, but it was like different worlds of mine collided at one spot.

Anyway, let’s not dwell on that any longer, the Swedish neighbor was already packing his things and getting ready to head home earlier because of a terrible headache. Non-surprising after his candy with energy drink and naturally forced mini naps on his keyboard. His fellow gamer friend sitting right next to us decided to continue his Dreamhack experience after a long nap behind his computer during extreme heavy DJ music blasting.

Not too far from our seats, the Swedish Pirate Party was showcasing 3D printers and informing young people about the political and legal battle of internet privacy and sharing the world is in. Always a hot topic, but there was something else that really caught our attention. The final Dreamhack championship e-sport match of CS: GO, Fnatic vs. Luminosity.

Live in front of us, two teams battled for the 100,000 US$ winner’s price. Each 5-player team was isolated from the outside world in a little extremely sound-isolated box with a coach standing right behind them calling tactics and strategies. It’s amazing how far E-sports has kicked it in the last years and become truly a new form of sport enjoyed by millions. After a convincing victory , we decided to start packing and prepare for our long drive back home.

It was about 3 AM on Sunday, that we stepped down the gas pedal and drove back home within a record breaking 12 hours. Back home, I dropped myself on my bed and woke up the next morning from a near 14-hour coma sleep. It was truly an amazing experience and will be repeated by Wooting next year.

Continues noise movement, people packing their sleeping gear and heading to the exit. My eyes had to break through a crust of sleep while we were abruptly woken up by Dreamhack personal. We had to leave the sleeping area at 10:30 in the morning because they would close it down.

We were quite surprised because a lot of people at Dreamhack will either play through the night or go to sleep very early in the morning. In either case, we desperately scavenged for coffee to get our energy back to level. Unlike our Swedish neighbor gamers, we can’t play the entire day and live on candy and energy drinks.

After our savvy granola with milk in a cup breakfast, we got back to business. Gaming that is. Our neighbors convinced us to start playing CS:GO with them, and we agreed, but once we logged into our accounts, it became apparent that we were too low ranked to play ranked matches with them. The only thing left was to play a casual match with them, but they would have nothing of it

Let down by our neighbors, we decided to check out some smash brother and time splitters speedruns in the E-sport area. Speedruns are basically people completing an entire game in record times. Very entertaining, since it’s often old school games, from “our era”.

Unfortunately, we were not able to showcase the Wooting mechanical keyboard at Dreamhack, something we had aimed for, but couldn’t realize. It didn’t stop our working spirit, as we went by the Indie game developers to share some of the exciting things we have planned. One interesting indie game, Funklift, caught our attention for its multiplayer brawling fun. 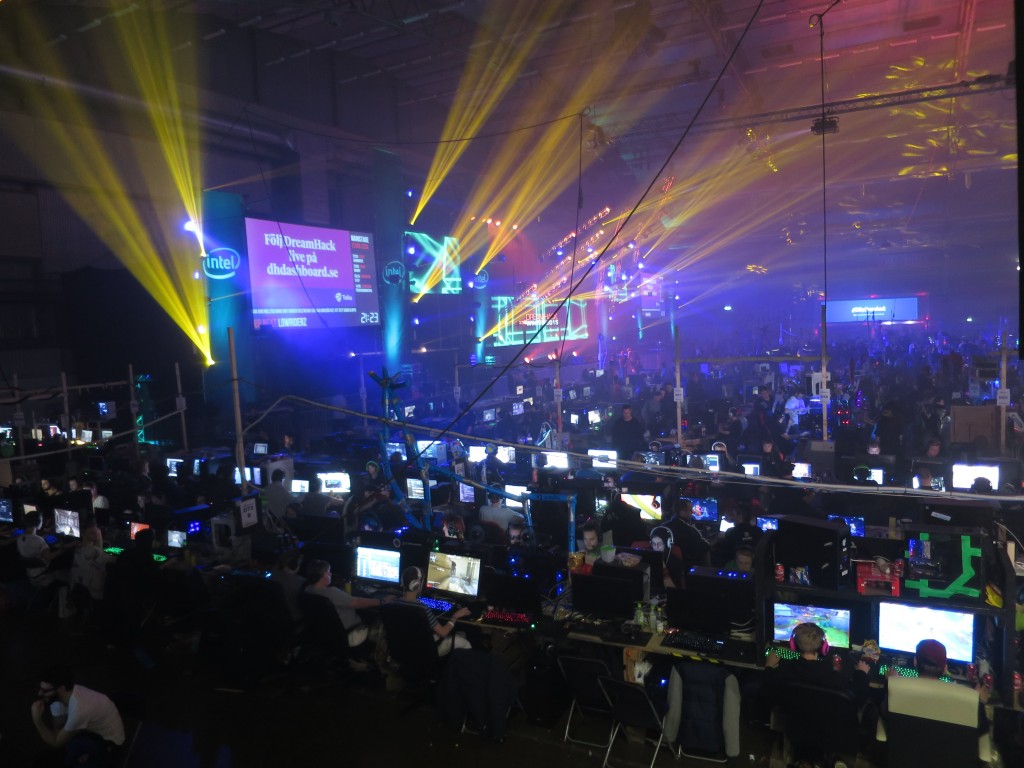 After spending already another full day at Dreamhack, the time has start to become irrelevant and endless, but nothing less is true. As we’re in the midst of a hall blasting music from a DJ to wake everybody up, we’re trying to achieve rank 3, so we can play CS:GO with our neighbors.

The day started early to play some Kendama and take it easy on our way to Dreamhack Winter 2015. When we arrived at Hall D, we setup out computer gear and were amazed how many people you could find hanging around and already playing games.

Not long after we were ready to blast some games, the entire hall started to fill up with people. Unknowingly we were in the middle of the opening ceremony of Dreamhack Winter 2015.

Night travelers in a dikke BMW

It’s just a couple minutes shy of midnight, raining slightly and dark outside. We’re all in front of the big car packed with computers, clothing and foods, ready to leave for Sweden.

Ahead of us was near 13-hour drive without considering the planned breaks in between. Our first goal was to reach Flensburg in Germany near the Denmark border, the last place for cheap beer and affordable groceries. Afterward, we would cross through Denmark into mega cold Sweden and head to our little cozy cottage near Jönköping where we would stay for a night before Dreamhack starts. Thankfully, we were able to arrange a quite big comfortable BMW.

After a 15 hour drive, we went through Germany, Denmark and half of Sweden to finally arrive at the little cottage. On the way, we had some nice scenery, foods, and extremely dry lips.

By the time we entered the cottage, we had all lost perception of time and the weather was not helping. Nearly the whole way was cloudy, rainy and gray. It was already pitch dark outside by the time we were ready to head out again for some groceries. Though it was only 4:30 pm.

Tomorrow will be a packed day full with people preparing their gear for the next coming days. We’ll be recording the day and will report our experience on this live blog, so keep an eye on this page!