There’s only a bit more than a week left before the Wooting two Kickstarter launches. I can speak for everyone at Wooting, to say that we’re all super nervous!

Before we launch the Kickstarter, I want to share the rewards we’re planning to have and I can use your honest feedback.

The more complexity, the more chance problems will arise and the more confusing it is for you guys. That’s why the rewards need to be as straightforward and simple as possible. No extra gimmicks, swag, fidgets or other waste. Though, dealing with international customer is a different story, you’ll see.

You know those Kickstarter that offer the product at half of the retail price? It’s ridiculous and not a viable. Either they’re not planning to bring the same product to retail or there is a ridiculous amount to be earned by their sales channels.

We want to put an emphasis on making you one of the original backers and supporters of the Wooting two. You and us, together, creating an impactful product.

Stretch goals aren’t necessarily a bad thing, but it comes back to the first point. It adds complexity and endangers the main focus point of the Kickstarter. I’m also very doubtful how much it will actually help us to get people to join the Kickstarter or not.

We might add a simple stretch goal that we’re keeping a secret for now.

There’s a handful of Kickstarters that promise a physical product which heavily relies their software to be useful. They will divide their rewards into all kinds of different early access types and more often than not, in the end, the software is still horrible when the product hits the mass users.

We promised to release the Wooting developer portal, then that means, it’s immediately available for everybody. Interested in helping development or testing our early phase software? Then hop onto discord and join in. No special reward tier or application.

Now without further due, let’s get into… 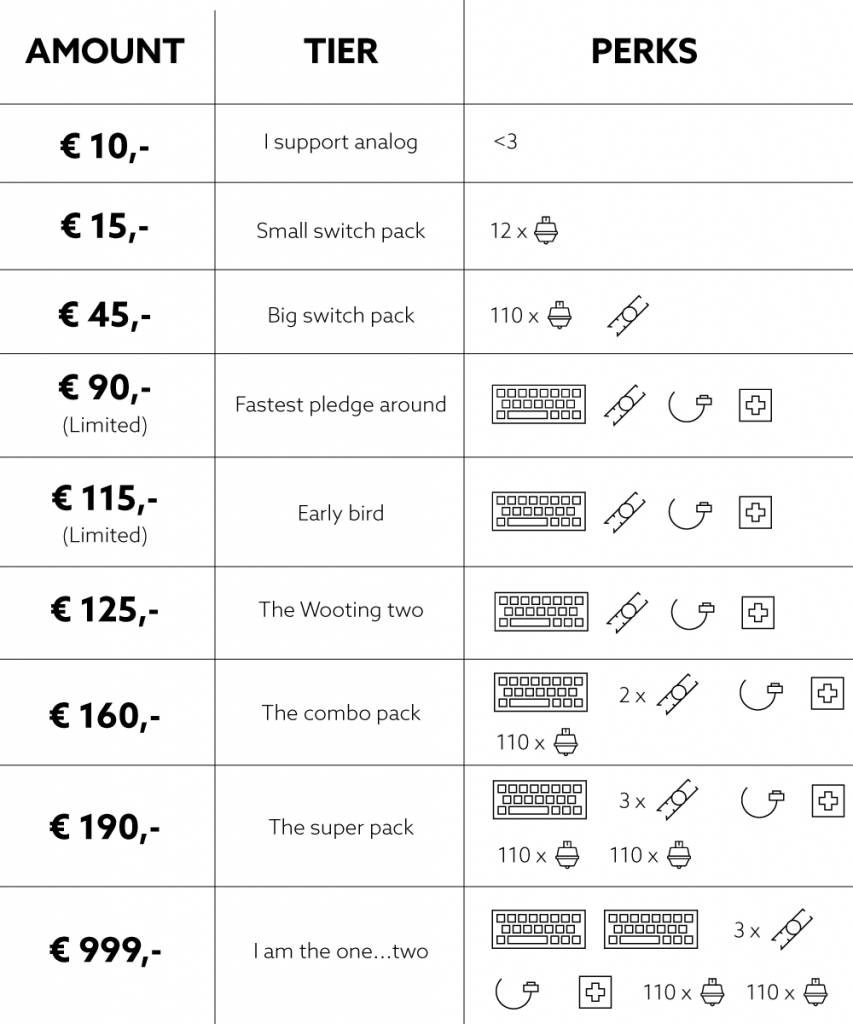 We will help import and deliver your reward within Europe without any unexpected charges. This will save you a major headache, long transits and unexpected bills from your local import customs.

How. We will import the goods, deal with customs, local VAT and any other charges for you. Then we will ship your reward from our fulfillment center in the Netherlands to you.

Reality. If you add the shipping and custom fee, in fact, it’s the Kickstarter price including VAT. This includes Free shipping in the Benelux and Germany. In other European countries there’s a small shipping fee. Take a look:

All the reward prices include free shipping in the United States. The Kickstarter prices are originally in Euros, but you will see them in a Kickstarter converted US dollar amount. We have done our best to keep the prices in line with our target but the ongoing conversion rate will heavily influence this.

Kickstarter forces us to display the prices in Euro. That’s why we’ve adjusted the Euro prices to better reflect our US dollar prices. Our solution is related to the message above.

How. We will import all the goods, deal with customs and any other charges for you. Then we will ship your reward from our fulfillment center in North Carolina to you.

What USA customer expect to pay:

Sounds confusing right? Sometimes it can be difficult to sell a product on a single platform for all the customers in the world, exchange rates, taxes, and a lot more mambo jumbo. But we think this is the best and most fair approach for both EU and US backers.

But… but when will it go live?
If everything goes smooth (Meaning kickstarter will approve our project in time), the kickstarter of the Wooting two will go live at the 31st of May 15:00/3:00 pm CEST (Amsterdam time). Here is a sweet overview:

And for those who would rather like a countdown: 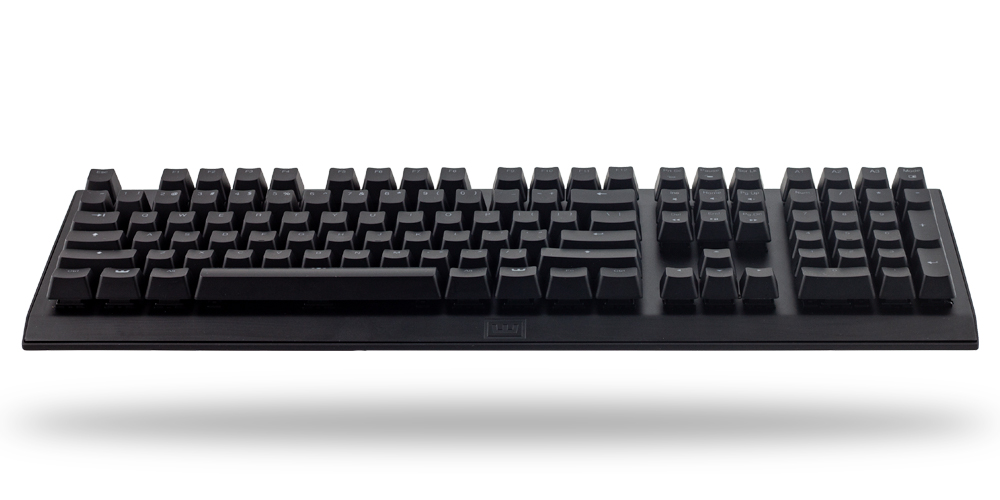 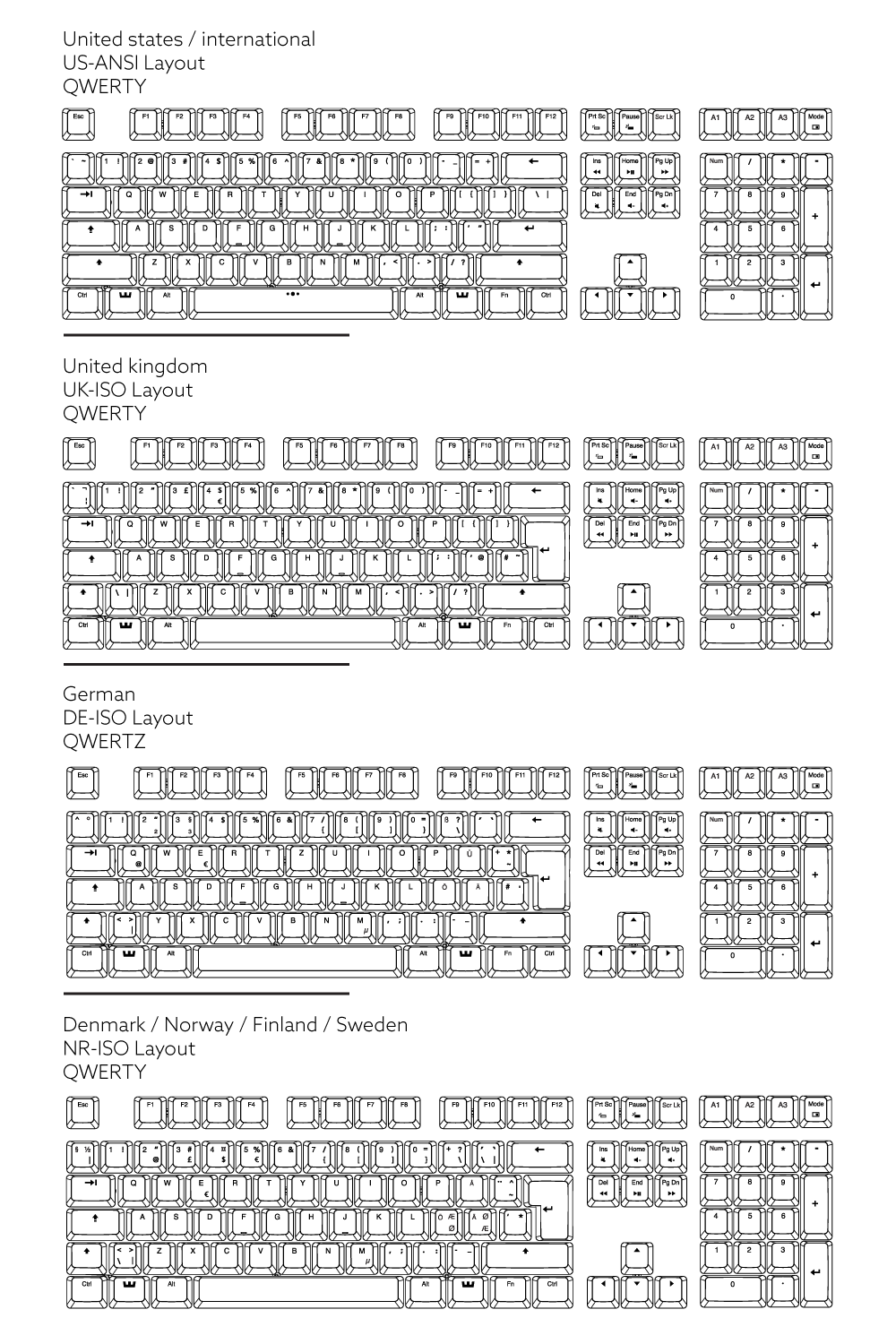 Didn’t see your language in between? Let us know what you want with the:

We’re always open and welcoming to feedback. You know where to find us: